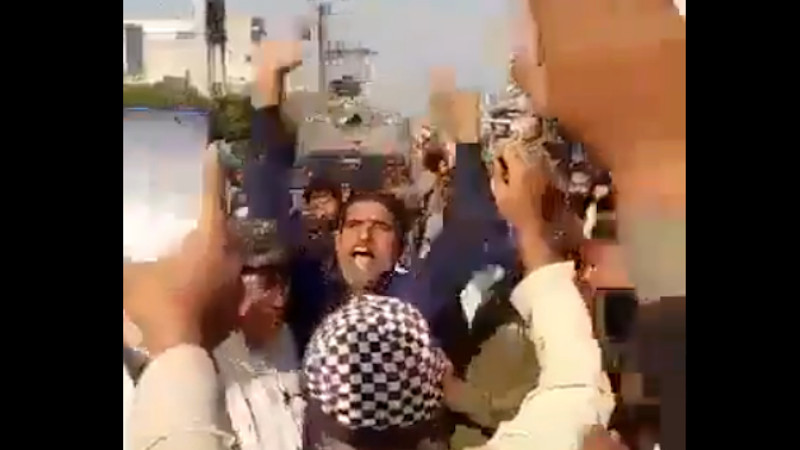 Moments after killing his bank manager for alleged blasphemy, Ahmad Nawaz waved to his supporters from the rooftop of a police station.

“Long live Tajdar-e-Khatm-e-Nubuwwat [King of the Finality of Prophethood]. Beheading is the only punishment of a blasphemer. We are servants of the Prophet,” he cried to the cheers of more than 200 gathered at the building in Quaidabad, Punjab province.

Videos shared on social media showed the crowd kissing Nawaz as he rallied in the streets of Quaidabad. A policeman filmed the speeches with his smartphone as a local cleric asked all to disperse peacefully.

“I am hundred percent satisfied with the police action. If the police violates, the lovers can gather just like today. I request all to trust your clerics. We have asked for a blasphemy investigation,” said Zafar-ul-Haq Bandialvi, holding a microphone.

“Police promised that Nawaz is to be charged for attempted murder, which is a bailable offence, and not under the Anti-Terror Act. He’ll be released soon and we’ll welcome him with celebration.”

Nawaz confessed to the murder.

“He was a blasphemer. He didn’t believe in the prophets of Allah. He stated that prophets are also dependent on other humans and that obligatory prayers are enough and supplementary prayers are not necessary,” Nawaz said, sipping tea at the police station.

The security guard was arrested on Nov. 4 for shooting Malik Imran Hanif, manager of the National Bank of Pakistan branch in Quaidabad. Hanif died after being admitted to a hospital in Lahore. Police officials have expressed doubt over the guard’s claim and cited personal grievances as the motive behind the murder.

The guard was fired a few months ago for not arriving on duty on time. He was rehired and had an argument with Hanif, said Khushab district police officer Tariq Wilayat.

The family of the deceased manager proclaimed their faith in a video message.

“Hanif was killed due to a personal dispute. The guard is trying to show he was not a lover of the prophet. This is all wrong. We are true lovers and have no relation with Qadianis. We demand a proper investigation,” said his uncle.

Blasphemy is a highly sensitive issue in deeply conservative Pakistan where mere allegations have led to extrajudicial killings and mob violence. The Ahmadis, viewed as heretical by many in Pakistan, are one of the most persecuted minority communities in the country. Declared to be non-Muslim according to the constitution of Pakistan in 1974, Ahmadis are frequently attacked, accused of blasphemy and subjected to discrimination in education and the workplace.

In July, Tahir Ahmad Nasim, a former member of the Ahmadi community, was shot dead inside a courtroom in the northwestern city of Peshawar. Lawyers later posted selfies with his killer, a former student at an Islamic school. In August, junior lawyer Tufail Khan was arrested for allegedly providing a pistol to the assassin.

They also burned an effigy of President Macron and demanded the severance of diplomatic ties with France.

In 2016, Pakistan executed former police bodyguard Mumtaz Qadri, who gunned down Punjab governor Salman Taseer over his opposition to the controversial blasphemy laws. Qadri is hailed as a hero by Islamist groups. Every day, dozens visit Qadri’s shrine built on a family plot bordering Islamabad, the federal capital.

In a recent press statement, the Catholic bishops’ National Commission for Justice and Peace (NCJP) expressed concern over rising religious intolerance in Pakistan.

“Unfortunately, Pakistani society has become increasing intolerant and living as a religious minority is becoming extremely challenging. The government must work to safeguard the rights of religious minorities in Pakistan as enshrined in our constitution,” said Archbishop Joseph Arshad, chairperson of the NCJP, and Father Emmanuel Yousaf (Mani), national director of the NCJP, in a joint statement.

Reverend Amjad Niamat, chairman of the Ecumenism and Interfaith Harmony Commission of the Presbyterian Church of Pakistan, condemned the recent killing.

“I am upset since the tragedy yesterday. Murders are being justified in the name of religion. We cannot trust Muslim security guards in this situation,” said the pastor, who lives at United Christian Hospital of Lahore.

“Our society is heading in a dangerous direction. The writ of the state and courts is being undermined and people are meting out capital punishment on their own. Even the educated ones need training in civility.”

“We respect the laws of our country but the blasphemy law seems useless nowadays due to lack of implementation. The trend of extrajudicial murders is damaging the image of our country. The alleged blasphemers are not given a chance to prove their innocence,” he told UCA News.