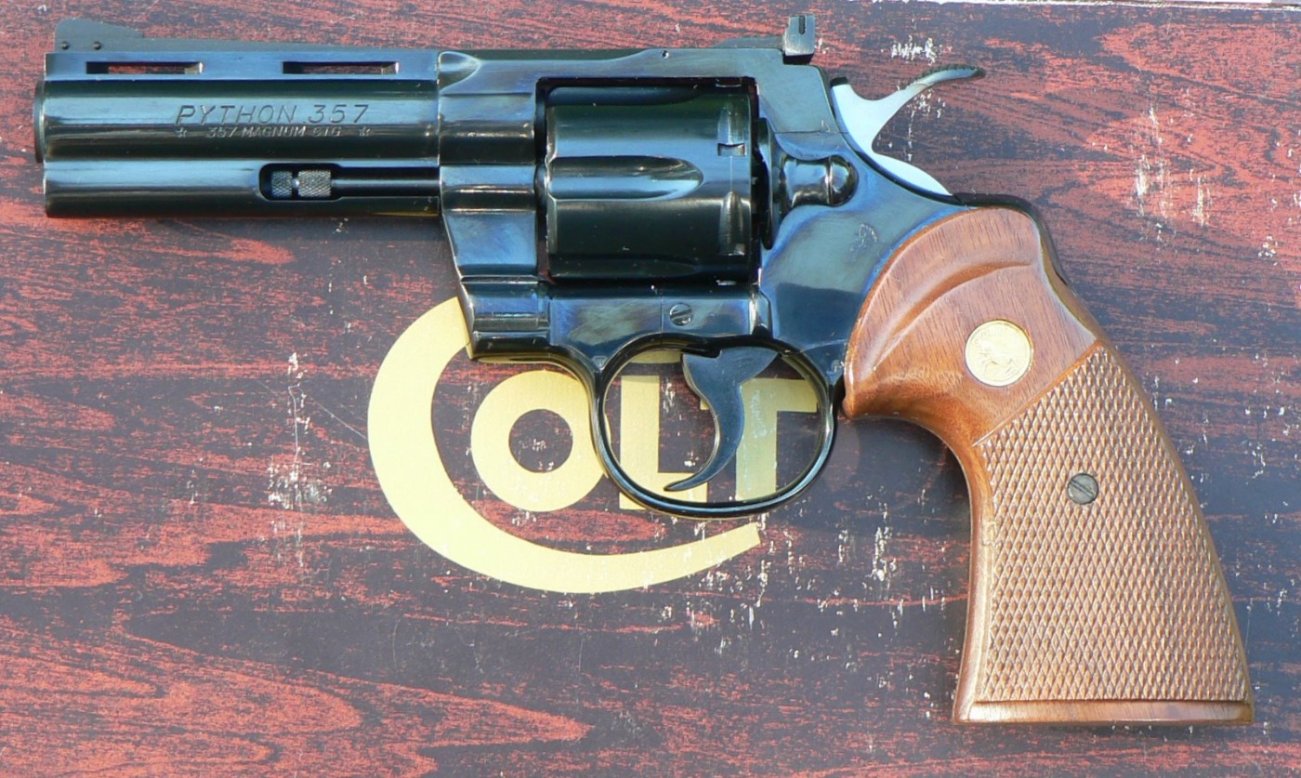 The Python was exactly what people imagined a revolver to be.

Here’s What You Need to Remember: The Colt Python was retired by Colt in 2005. The real reason why Colt gave up on such a desirable money maker is unknown, but the high cost of modern labor — a single Python could involve hours of personal attention — could be the reason.

In the world of firearms, which gun is truly the best is difficult to quantify. The sheer amount of innovation and the multitude of designs over nearly two hundred years of handgun development makes for a crowded field. However, in the world of revolvers, there is one that is clearly head and shoulders above the competition: The Colt Python. It is almost certainly the perfect revolver.

In many ways, it is natural for the perfect revolver to come from Colt. Founded by inventor Samuel Colt as the Colt’s Patent Fire-Arms Manufacturing Company, Colt specialized in revolving firearms. One of Samuel Colt’s first mass produced firearms, the Walker Colt was a large, iron framed, six cylinder .44 caliber black powder revolver. A nine-inch barrel made it the firearm of choice for mounted cavalry, and Colt’s follow-up was the more refined Dragoon series of revolvers.

More than a hundred years after Colt’s successful line of cavalry pistols the company released a new revolver: the Colt Python. One of seven mid-20th century Colt handguns named after snakes, the Python was introduced in 1955. The Python was a beefy, all steel and wood revolver chambered in .357 Magnum. The revolver had a six-shot cylinder and originally came with either a bright nickel or royal blue finish.

Recommended: Uzi: The Israeli Machine Gun That Conquered the World

Recommended: The M4: The Gun U.S. Army Loves to Go to War With

Recommended: Why Glock Dominates the Handgun Market (And Better than Sig Sauer and Beretta)

The Python was exactly what people imagined a revolver to be. The Python had a slightly oversized, stout .41 caliber frame with beautiful, beveled edges. The trigger well was large and capable of accommodating gloved fingers. The revolver was most commonly sold with a six-inch barrel, although two, three, four, and eight-inch barrels were also available.

The barrel was the Python’s most defining and beautiful feature. A full length ventilated rib ran the length of the barrel, all the way to the muzzle, leading to the front iron sights. This was complemented by a full length underlug with a knurled ejector rod tastefully nestled inside. The result was a barrel that at first glance looked outsized, as though it was a larger caliber than it really was.

Pythons were made the old fashioned way, by hand, when as one gun writer put it, “technology was relatively expensive and labor was comparatively cheap.” Parts were fitted by hand by skilled machinists who could take the time to tweak and polish the fifty-seven parts that made up a Colt Python until it ran like a watch. The Python may have been the last mass-produced handgun built with a nod to Old World craftsmanship.

Colt Pythons were notoriously accurate right out of the box, and were prized by gun owners for their accuracy. Gun authority Chuck Hawks states that his Python came from the factory with a paper target featuring a, “3/4-inch, 6 shot group fired by hand at 25 yards” using factory ammunition.

Much like its predecessors the Walker Colt and Dragoon, the handsome revolver found a niche with police and highway patrol forces across the country. Law enforcement personnel that, like their dragoon predecessors, traveled mounted (albeit in cars instead of horses) appreciated a reliable sidearm with a reassuring heft and the stopping power of the .357 Magnum cartridge.

All the steel and wood indeed made for a hefty firearm: the Python weighed two pounds, six ounces unloaded, a full ten ounces heavier than an unloaded Glock 17. But while the Glock 17 is restricted to nine-millimeter ammunition, the Python can fire both lighter .38 Special rounds and .357 Magnum rounds. The weight of the Python’s steel is also useful in soaking up Magnum-level recoil.

The Colt Python was retired by Colt in 2005. The real reason why Colt gave up on such a desirable money maker is unknown, but the high cost of modern labor — a single Python could involve hours of personal attention — could be the reason. While modern machining processes could create the equal of the Python, the reassurance that hours of personal attention and gunmaking experience was invested in a product cannot be replicated by a machine. A mixture of firepower, good design, beauty and craftsmanship, the Colt Python was the perfect revolver.

Kyle Mizokami is a defense and national-security writer based in San Francisco who has appeared in the Diplomat, Foreign Policy, War is Boring and the Daily Beast. In 2009 he cofounded the defense and security blog Japan Security Watch. You can follow him on Twitter: @KyleMizokami. This first appeared two years ago.