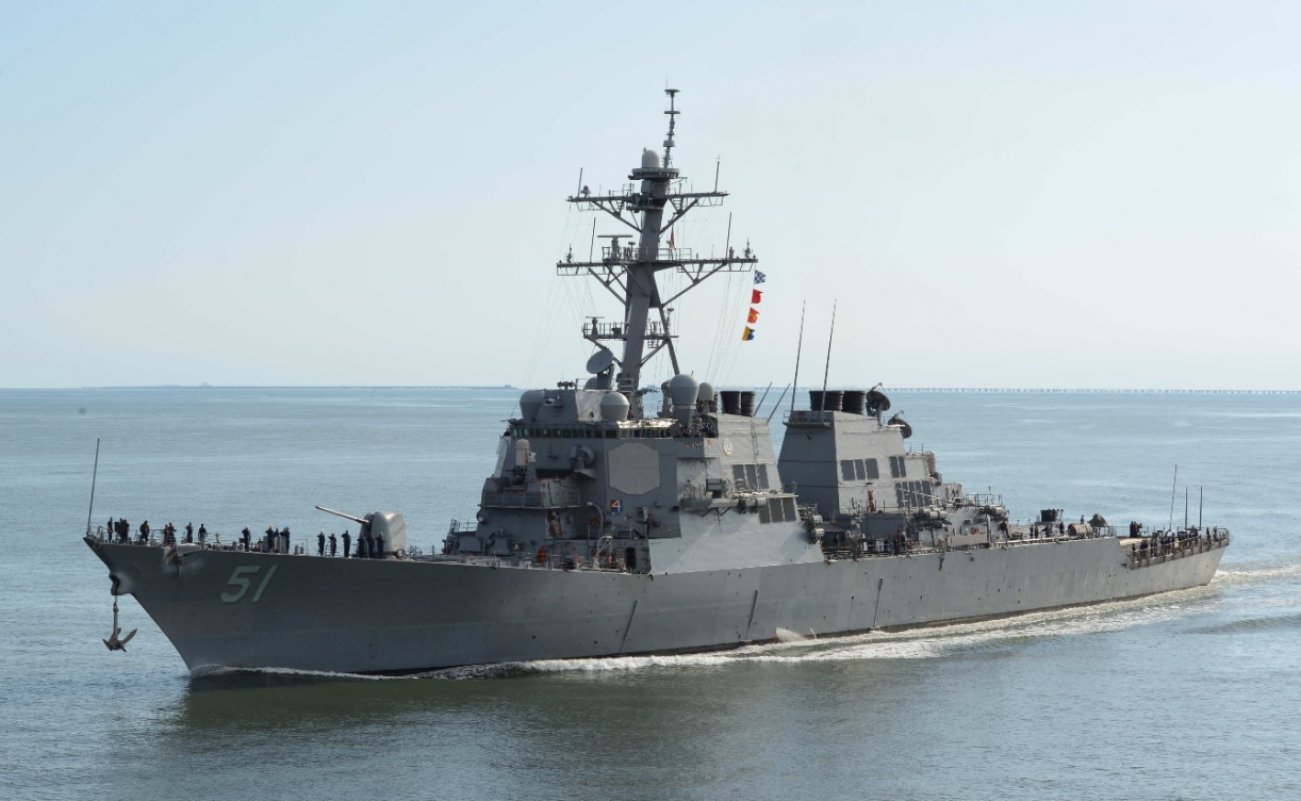 Here’s What You Need to Remember: It goes without saying that more sensitive, discriminating radar is needed to counter emerging threats, as potential adversaries now possess longer range weapons, more precise targeting and navigational systems and a much wider sphere of weapons and platforms with which to attack surface ships.

Navy Flight III Destroyers have a host of defining new technologies not included in current ships such as more on-board power to accommodate laser weapons, new engines, improved electronics, fast-upgradeable software and a much more powerful radar. The Flight III Destroyers will be able to see and destroy a much wider range of enemy targets at farther distances.

The ship, called DDG 125, will be named the USS Jack H. Lucas; it is the first of many Flight III Destroyers the Navy plans to build.

This means that the ship can succeed in more quickly detecting both approaching enemy drones, helicopters and low flying aircraft as well as incoming ballistic missiles.

“Having a flexible architecture allows us to adapt to new mission requirements. Identifying enemy aircraft is different than air traffic control,” Spence said.

Earlier this year, as part of a final step before formal integration of the radar onto Flight III Destroyers, the Navy conducted a successful intercept test against a ballistic missile target using the SPY 6 v1, a Navy statement said.

Service officials say the new ship uses newly integrated hardware and software with common interfaces, something which will enable continued modernization in future years. Called TI 16 (Technical Integration), the added components are engineered to give Aegis Baseline 10 additional flexibility should it integrate new systems such as emerging electronic warfare or laser weapons, according to Navy statements.

Officials with Naval Sea Systems Command have said the new radar, which previously completed a System Functional Review, is now being integrated onto the new Destroyers. The radar, able to simultaneously track multiple threats, has also successfully completed several simulated weapons engagement loop, verifying the technical ability to track both ballistic missiles and closer-in threats like enemy drones. The additional sensitivity and range enables the radar to detect, and enable Commanders to destroy, smaller threatening objects at much farther ranges – changing the tactical and strategic equation for Destroyers. Naturally, the farther away a threat can be detected, the much greater the chance it can be intercepted or destroyed; this changes the mission scope for Navy Destroyers, enabling them to operate in higher threat areas in some instances and expand their ability to protect other ships and assets.

The SPY 6 radar has built upon and extended some of the core technical aims of the original SPY 1D, a system which first emerged years ago as a way to counter the low-altitude anti-ship cruise missile threat, according to an interesting essay from the Johns Hopkins University Applied Physics Laboratory, Technical Digest. A key element on this aim, according to the paper, is to assess the “impact of surface clutter on system performance.” (Johns Hopkins Univ., APL, “Radar Development for Air and Missile Defense,” 2018.)

This multi-year developmental emphasis outlined in the essay is significant, as previous efforts established a key technological foundation for the SPY 6; the additional radar sensitivity includes an ability to better discriminate clutter, debris and other objects from actual threats. Higher fidelity radar, such as an SPY 6, can discern threats in adverse weather and operate in congested combat circumstances to a much greater extend than previous systems, a technology sought after for many years by the Navy as cited in the John’s Hopkins essay . This ability, much of which rests upon high-frequency signals, helps give the SPY 6 its ground-breaking scope. The SPY 6 can distinguish approaching enemy anti-ship missiles close to the surface from less relevant objects and also track higher-altitude ballistics missiles — on the same system. Given this scope, the SPY 6 radar systems streamline otherwise disparate fire-control technologies; the SPY 6 can cue short-range, closer-in interceptors as well as longer-range ballistic missile interceptors such as a SM-3. This shortens sensor to shooter time and offers war commanders a longer window with which to make decisions about which countermeasure is needed.

The radar works by sending a series of electro-magnetic signals or “pings” which bounce off an object or threat and send back return-signal information identifying the shape, size, speed or distance of the object encountered.

The development of the radar system is also hastened by the re-use of software technology from existing Navy dual-band and AN/TPY-2 radar programs, Raytheon developers added. The software development is being done through what Raytheon describes as an “agile” process, meaning it is built incrementally in order to keep pace with rapid technological advances and integrate effectively with existing and future systems.

“Our Spy 6 radar is what we call combat management system agnostic. We can integrate with any system out there in the fleet. Instead of four different software baselines, we have one,” Spence said.

Spence explained that the AN/SPY-6 is the first truly scalable radar, built with radar building blocks – Radar Modular Assemblies – that can be grouped to form any size radar aperture, either smaller or larger than currently fielded radars.

“All cooling, power, command logic and software are scalable. This scalability could allow for new instantiations, such as back-fit on existing DDG 51 destroyers and installation on aircraft carriers, amphibious warfare ships, frigates, or the Littoral Combat Ship and DDG 1000 classes, without significant radar development costs,” a Raytheon written statement said.​

In fact, different variants of the radar have been scaled for a range of different mission sets on various platforms. Alongside the integration of AN/SPY 6 v1 for Flight III Destroyers, Raytheon and the Navy are now integrating several additional variants for carriers and amphibs, specifically tailored to their respective mission scopes. The SPY 6 v2, for instance, is a smaller rotating radar and a SPY 6 v3 has three fixed radar faces on the deck houses. These variants will go on both Nimitz class and Ford-class carriers. The v3 has nine radar module assemblies. The v3) has three fixed spaces looking out at a different angle, covering 360-degrees with 120-degree panels each.

Finally, there is a SPY 6 v4 which will be integrated onto existing DDG 51 IIA destroyers during a mid-life upgrade. The v4 has 24 Radar Module Assemblies, compared to the v1, which has 37.

All of these radars, which bring a sensitivity expanded beyond legacy or existing radars, have their power, cooling and scope adjusted to fit the specific missions of various platforms. Destroyers, for instance, will need to conduct Ballistic Missile Defense to protect carriers in Carrier Strike Groups. Amphibs and Carriers, which are receiving a different SPY 6 variant, have different mission needs.

Spence explained that Gallium Nitride is designed to be extremely efficient and use a powerful aperture in a smaller size to fit on a DDG 51 destroyer with reduced weight and reduced power consumption. Gallium Nitride has a much higher breakdown voltage so it is capable of much higher power densities, developers said.

The AN/SPY-6 is being engineered to be easily repairable with replaceable parts, fewer circuit boards and cheaper components than previous radars; the AMDR is also designed to rely heavily on software innovations, something which reduces the need for different spare parts. The Navy has finished much of the planned software builds for the AMDR system.

However, special technological adaptations will be necessary to ensure the new, larger radar system can be sufficiently cooled and powered up with enough electricity, Navy developers added.

Regarding electricity, the Navy previously awarded a competitive contract to DRS technologies to build power conditioning modules – systems designed to turn the ship’s on-board electrical power into 1000-volt DC power for the AMDR.

The DDG Flight III’s are also being built with the same Rolls Royce power turbine engineered for the DDG 1000, yet designed with some special fuel-efficiency enhancements.

The AMDR is equipped with specially configured cooling technology. The Navy has been developing a new 300-ton AC cooling plant slated to replace the existing 200-ton AC plant, Navy developers have explained.

Before becoming operational, the new cooling plant is being engineered to tolerate vibration, noise and shocks such as those generated by an underwater explosion, service officials said.

It goes without saying that more sensitive, discriminating radar is needed to counter emerging threats, as potential adversaries now possess longer range weapons, more precise targeting and navigational systems and a much wider sphere of weapons and platforms with which to attack surface ships.

Osborn previously served at the Pentagon as a Highly Qualified Expert with the Office of the Assistant Secretary of the Army – Acquisition, Logistics& Technology. Osborn has also worked as an anchor and on-air military specialist at national TV networks. He has appeared as a guest military expert on Fox News, MSNBC, The Military Channel and The History Channel. He also has a Masters Degree in Comparative Literature from Columbia University. This article first appeared earlier this year.