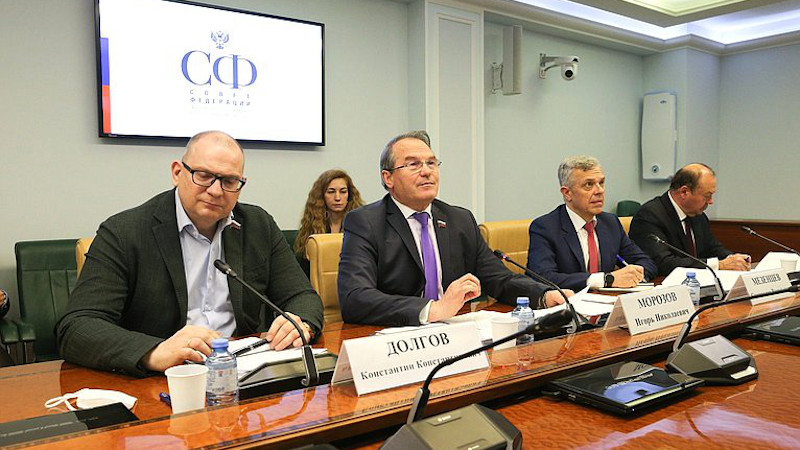 On November 23, Russian Senators, Academicians, Researchers and Experts gathered to discuss the export of non-commodities to Africa at the interactive webinar, organized by Federation Council of Russia, Chamber of Commerce and Industry of Russia, and Business Russia Association.

According to the organizers, the meeting was to identify funding for exports, to concretize proposals for increasing exports to Africa and to facilitate amendments to the Russian legislation if required to promote exports to African market.

During the videoconference, many questions including the issues of developing a system of state support for Russian enterprises exporting products to the African market, as well as the participation of Russian regions in the development of exports to African countries were thoroughly discussed.

Senator Igor Morozov noted that in conditions of sanctions pressure, new markets, new partners and allies are important for Russia. “This predetermines the return of Russia to Africa, makes this direction a priority both from the point of view of geopolitical influence, and in the trade and economic context.”

“It is important for us to expand and improve competitive government support instruments for business. It is obvious that over the thirty years when Russia left Africa, China, India, the USA, and the European Union have significantly increased their investment opportunities,” Morozov stressed.

He, however, suggested creating a new structure within the Russian Export Center – an investment fund, explained further that “Such a fund could evaluate and accumulate concessions as a tangible asset for the Russian raw materials and innovation business.”

Konstantin Dolgov touched upon the topic of using political ties with African countries to build up economic and investment cooperation. He also pointed out the need to connect Russian regions, to maximize their export potential.

Alexey Pushkov noted that with the right strategy, such a large state as Russia has a chance to take strong positions in interaction, in particular, economic, with other continents, including Africa. “The competition will certainly grow,” the Senator said, noting that the situation is constantly changing.

Representative from the Russian Export Center (REC), Veronika Nikishina, informed the gathering about Russian projects that are being implemented or planned in the African market, including the supply of passenger cars to Egypt, wheat supplies, as well as REC business missions, participation in exporters’ exhibitions.

REC offers a wide range of financial and non-financial support tools to benefit the Russian exporters explore the foreign markets and build capacity in the global trade. Generally, the African market is of particular interest to potential Russian exporters, and negotiations with government, trade agencies and business community to allow establishing effective ways of entry to the huge continental market. With an estimated population of 1.3 billion, Africa constitutes a huge market for all kinds of products and a wide range of services.

According to her, since July 2020, the REC began to practice online business missions, which in the absence of physical contacts, allows continuing communications, maintaining current exports and looking for new niches.

According to Professor Irina Abramova, Director of the Institute for African Studies under the Russian Academy of Sciences, financial instruments are the main issue of Russian interaction with the continent. She touched upon such topics as Russian investments in African countries, the prospects for establishing direct contacts on the supply of agricultural products with African countries.

Quite recently, the Ministry of Foreign Affairs created the Secretariat for Russia-Africa Partnership Forum. The Secretariat further established an Association for Economic Cooperation with African States. The Russian Chamber of Commerce and Industry has also restructured its Coordinating Committee for Economic Cooperation with African States that was established as far back in 2009.

After the first Russia-Africa Summit in the Black Sea city Sochi on October 23-24 in 2019, Russia and Africa have resolved to move from mere intentions to concrete actions in raising the current bilateral trade and investment to appreciably higher levels in the coming years. Indeed, all the structures are fixed for the necessary take-off.

“There is a lot of interesting and demanding work ahead, and perhaps, there is a need to pay attention to the experience of China, which provides its enterprises with state guarantees and subsidies, thus ensuring the ability of companies to work on a systematic and long-term basis,” Foreign Minister Sergey Lavrov explicitly said.

According to Lavrov, the Russian Foreign Ministry would continue to provide all-round support for initiatives aimed at strengthening relations between Russia and Africa. “Our African friends have spoken up for closer interaction with Russia and would welcome our companies on their markets. But much depends on the reciprocity of Russian businesses and their readiness to show initiative and ingenuity, as well as to offer quality goods and services,” he stressed.

Amid a stagnating economy and after years of Western sanctions, Moscow is looking for both allies and an opportunity to boost growth in trade and investment. Currently, Russia’s trade with Africa is less than half that of France with the continent, and 10 times less than that of China. Asian countries are doing brisk business with Africa.In terms of arms sales, Russia leads the pack in Africa, and Moscow still has a long way to catch-up with many other foreign players there. In 2018, Russia’s trade with African countries grew more than 17 percent and exceeded US$20 billion. At the Sochi summit, Russian President Vladimir Putin said he would like to bring the figure US$20 billion, over the next few years at least, to US$40 billion.