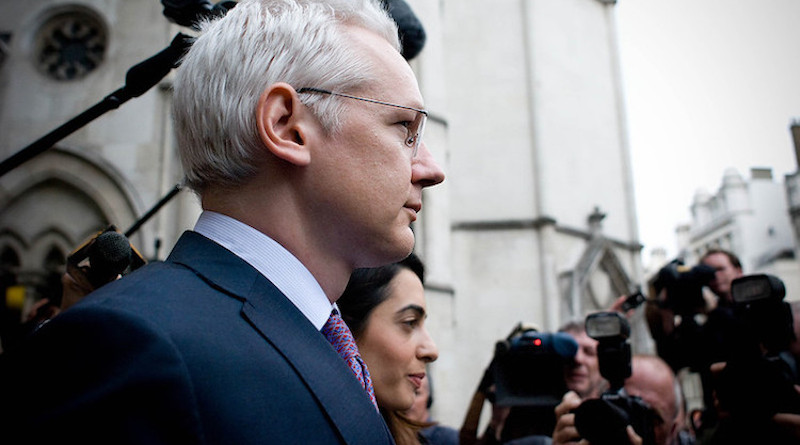 The odds are stacked against Julian Assange, the WikiLeaks publisher who faces the grimmest of prospects come January 4.  On that day, the unsympathetic judicial head of District Judge Vanessa Baraitser will reveal her decision on the Old Bailey proceedings that took place between September and October this year.  Despite Assange’s team being able to marshal an impressive, even astonishing array of sources and witnesses demolishing the prosecution’s case for extradition to the United States, power can be blindly vengeful.

Such blindness is much in evidence in a co-authored contribution to The Daily Signal from this month.  The authors are insipidly predictable: national security and technology types with comic strip names (Charles “Cully” Stimson; Klon Kitchen) and rule of law advocates who seemingly campaign against their own brief (John G. Malcolm).  Having not bothered to read the evidence submitted at the extradition trial, the authors are obedient to a fictitious record.  This includes allegations that WikiLeaks harmed US diplomatic relations; the stubborn libel that Assange’s actions, far from exposing US atrocities, led to a loss of life; and the disruption of essential “intelligence sources and methods”.  (Accountability can be expensive.)

The authors fail to appreciate the dangers of the Assange case to the First Amendment, free speech and the publication of national security information.  They merely claim to be free speech defenders, only to neatly hive Assange’s activities off from its protections.  Free speech is a fine thing as long as it is innocuous and inconsequential.  “Suppression of speech, in a free society, is wrong.  But Assange is not a free-speech hero.”

By internationalising the reach of the Espionage Act, the indictment against Assange threatens the global documentation and reporting of classified information in the public interest.  To put it in elementary terms for the legions of ignorant security hacks, granting the request will legitimise the targeting of US citizens.  Bruce D. Brown, executive director of the Reporters Committee for Freedom of the Press, summarises the implications.  “If the UK grants the request to deliver Assange, UK prosecutors could make similar arguments in an effort to extradite a journalist in the US for violations of its Official Secrets Act, which explicitly criminalizes the publication of leaked military or intelligence information.”

Of central importance in the Assange pardon drive is the cultivation of vanity and, it follows, the appeal to posterity.  “We write to request that you put a defining stamp to your presidential legacy by pardoning Julian Assange or stopping his tradition,” urge the signatories of yet another letter to Trump on the subject.  The heavy artillery is impressive, including five Nobel Prize laureates: Northern Irish peace activist Mairead Maguire, human rights activist Adolfo Pérez Esquivel, Iranian political activist and lawyer Shirin Ebadi, feminist campaigner Rigoberta Menchú Tum and Austrian novelist Peter Handke.

Appropriately, the signatories impress upon Trump that the case “threatens the constitutional protections that Americans hold dear” and suggest that history will be kind should he show sound judgment in the case.  “By offering a pardon, to put a stop to the prosecution of Assange, your presidency will be remembered for having saved First Amendment protections for all Americans.”

The approach taken by the UN Rapporteur on torture and other cruel, inhuman or degrading treatment or punishment is more expansive and detailed.  In his appeal to Trump on December 22, Nils Melzer outlines the high price Assange has paid “for the courage to publish true information about government misconduct throughout the world.”  The deteriorating health condition of the publisher is noted, including the risks posed to him by the COVID-19 pandemic at Belmarsh prison in London.

The relevant pointers are there: that Assange is not an enemy of the American people; his work and that of WikiLeaks “fights secrecy and corruption throughout the world and, therefore, acts in the public interest of the American people and of humanity as a whole.”  He had not hacked or pilfered the information he published, having “obtained it from authentic documents and sources in the same way as any other serious and independent investigative journalists conduct their work.”

Melzer then seeks to appeal to Trump the man, pleading for Assange’s release as the president had “vowed … to pursue an agenda of fighting government corruption and misconduct; and because allowing the prosecution of Mr Assange to continue would mean that, under your legacy, telling the truth about such corruption and misconduct has become a crime.”

Finally, the personal touch is being fashioned for the president, spearheaded by Assange’s fiancée Stella Moris.  Her appearance on Fox News with host Tucker Carlson was primed for Trump’s hearty consumption, laden with hooks of catchy lingo.  This made perfectly good sense; there is still some time to go before the world’s first Fox News president vacates the White House.  “Once he [Assange] gets to the US,” feared Moris, “he will be in the hands of the Deep State.  That’s why I pleaded with the President to show the mercy the Deep State will not show Julian if he is extradited.”

Carlson was certainly convinced, taking a position at odds with various national security wonks that pullulate the US airwaves.  “Whatever you think of Julian Assange and what he did, he is effectively a journalist.  He took information and he put it in a place the public could read it.”  The Australian was spending time in prison for releasing documents “he did not steal,” merely providing a platform for their dissemination, showing that “the US government was illegally spying on me, and everybody else in this country.”

The seeds for a stinging provocation against the US imperium have been sown.  Whether they take firm root and grow in the self-absorbed mind of the commander-in-chief is another matter.