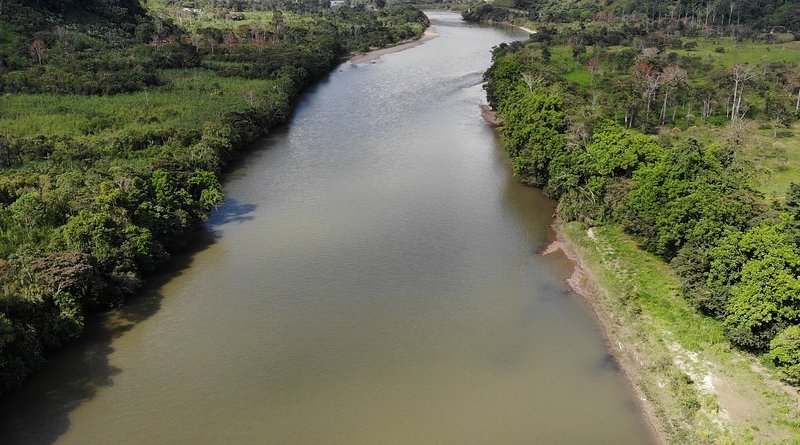 Phosphorous, calcium and charcoal in spotty patches of fertile soil in the Amazon rainforest suggest that natural processes such as fires and river flooding, not the ingenuity of indigenous populations, created rare sites suitable for agriculture, according to new research.

The presence of pre-Columbian artifacts and signs of plant domestication uncovered in the region’s fertile soil, commonly called Amazonian dark earth, had been thought to mean that agricultural practices, including controlled burning, by indigenous people had boosted soil nutrients.

However, radiocarbon dating of soil at an extensively studied 210-hectare basin near the confluence of the Solimoes and Negro rivers in northwest Brazil tell a different story, said Lucas Silva, a professor of environmental studies at the University of Oregon who led the project.

In a paper that published in Nature Communications, a 14-member team report that phosphorous and calcium levels at the site, which is home to the Brazilian Agricultural Research Corp., are orders of magnitude higher than in surrounding soil.

Those levels, Silva said, correlate spatially with 16 trace elements that indicate that fertility did not form in place. Combined with other elements in the soil and isotopic ratios of neodymium and strontium, the researchers concluded that pre-settlement river flooding likely delivered nutrients and charcoal from upstream.

“We analyzed carbon and nutrient pools in light of the local anthropological context to estimate the chronology of management and the population density needed to attain the observed gain in Amazonian dark earth fertility compared to the surrounding landscape,” Silva said.

Much of the Amazon contains highly weathered oxisols and ultisols, tropical soil types with high acidity and low nutrient levels. Archaeological artifacts have been found in charcoal-rich soil that began forming about 7,600 years ago, about 1,000 years before indigenous people transitioned from nomadic to sedentary populations in patches of land in the notoriously nutrient-poor Amazon environment, the researchers noted.

“Our results show that large sedentary populations would have had to manage soils thousands of years prior to the emergence of agriculture in the region or, more likely, that indigenous peoples used their knowledge to identify and preferentially settle areas of exceptionally high fertility before the onset of soil management in central Amazonia,” he said.

Researchers have long theorized that Amazonian dark earth had been formed by controlled burning of forest biomass. That view, Silva said, fueled an entire industry of charcoal production from biosolids, such as biochar, in which such soils are considered a model for sustainable agriculture.

Charcoal and nutrient accumulation, the researchers argue, match that found in sedimentary deposits that can be traced to open vegetation fires upstream from rivers that flooded.

Records of soil content and past monsoon intensity, the researchers said, indicate a climate-driven shift in river dynamics after a long dry period between 8,000 and 4,000 years ago. That shift to flooding, they noted, would have reduced fire disturbance, increased regional tree coverage and “could have caused divergent patterns of carbon and nutrient accumulation in flooded versus non-flooded areas,” consistent with the minerals in the dark earth at the research site.

Many areas of central Amazonia today are associated with sediment deposits that reflect flood regimes that were either deactivated during the Holocene or are presently in the process of deactivation, when sedimentary deposits become suitable habitats for grasslands within the rainforest, the researchers wrote.

“Our findings underscore the need for a broader view of landscape evolution as a path towards understanding the formation of Amazonian dark earths and redirecting applications for sustainable land use and conservation,” said Silva, who has visited and gathered samples from the site since 2009 when he was a doctoral student.

“If corroborated elsewhere,” he said, “our hypothesis would transform our understanding of human influence in Amazonia, opening new frontiers for the sustainable use of tropical landscapes going forward.”

The article Fires, Flooding Before Settlement May Have Formed Amazon’s Rare Patches Of Fertility appeared first on Eurasia Review.