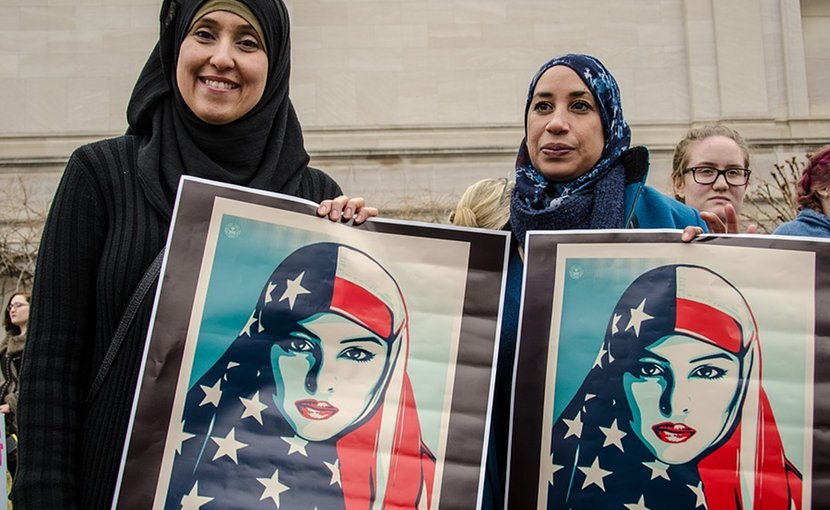 Joe Biden will be sworn in as the 46th president of the US next week, with the backing of Arab, Muslim and Palestinian American voters. The key question remains, however, was the vote for Biden merely a protest against the outgoing administration, which was vilified by many Arabs and Muslims, or was it because of a firm belief that he will actually bring change for the Arab world generally and Palestinians in particular?

I think it is clear that Biden has opened the door a little wider than his predecessors, having last year issued what Arab Americans called a “historic” six-page “Plan for Partnership” with the community. No other presidential candidate has directly addressed the concerns of Arab Americans in the way Biden did with this document.

But what does it really mean? Well, Biden has moved quickly to name several Arab Americans to key positions in his administration. These appointees have, however, refrained from speaking publicly to Arab Americans about what is expected of them. And they are already under attack from the pro-Israel movement, which has accused them of harboring views that are “anti-Israel” — a sacred institution in American politics that few are allowed to question.

Biden’s “partnership” document speaks to some important issues, like supporting a freer form of immigration. While Trump restricted immigration, using what was described as a “Muslim ban” to stop arrivals from six predominantly Muslim nations, the president-elect has called that “morally wrong” and promised to end the ban. He has also vowed to reinforce protections for so-called “Dreamers,” the children of illegal immigrants to America who continue to fight for citizenship.

Biden also promised in his plan to fight “discriminatory policies that single out Arab Americans and cast entire communities under suspicion.” What policies are these? Will he call out the anti-Arab racism, such as the distortion of the truth about the 1948 Palestinian Nakba, which has been denounced by pro-Israel members of Congress, including many Democrats?

There was heightened discrimination against Arabs and Muslims in America after the terrorist attacks of Sept. 11, 2001, but most of that has subsided. However, nothing has ever been done to make up for the failure of Congress to recognize the dozens of Americans who were beaten or killed in the weeks after 9/11 because they were or looked like they might be “Middle Eastern.”

Biden says he will review the Department of Homeland Security’s no-fly list and the watch list, which targets individuals suspected of involvement in terrorism, as well as ending the racial profiling of suspects based on their appearance.

And he has said he will support the inclusion of a “Middle East and North Africa” category on future US Census forms, which would boost the identification of America’s Arabs. There are 22 racial and ethnic groups currently listed in the Census, which is conducted every decade. These statistics are used to help distribute billions of dollars in grants and funding to the ethnic and racial groups that are listed.

Biden’s partnership document, if you read it carefully, is actually filled with a lot of positive words about protecting the civil rights of everyone, not just Arabs. The most important part is the least descriptive, which is titled “Championing democracy and human rights globally.” Does that mean censoring Israel when it discriminates against its non-Jewish citizens? Will Biden stand up for the rights of Palestinians who live under occupation? Will he return the vernacular of the Middle East conflict to reality by calling things what they are: An “occupation,” not “disputed territories?”

Will Biden speak out against the laws adopted by more than 30 American states that call for punishments and contract restrictions against anyone who supports the Boycott, Divestment and Sanctions movement? The issue of boycotting Israel because of the exploitation of stolen Palestinian lands by the illegal and racist settler movement has been a big topic in the US and the world, but it is not addressed in Biden’s document.

I hope the president-elect will stand up for all the things he says he is going to stand up for. Many presidents before him have uttered — and then failed to keep — the same promises.

I have to ask Arab Americans, what are we really expecting? Will Biden have the courage to stand up to Israel’s racist policies and achieve a two-state solution, in which Palestinians have their own sovereign state with Jerusalem as its capital? Or will he simply move all of us Arabs, Muslims and Palestinians back to where we were under his predecessors — leaders who literally did nothing of substance to defend the rights of the Palestinian people or champion democracy in the Arab world?

If we argue that is too much to expect from any American president, I have to then ask: What is the point of it all?