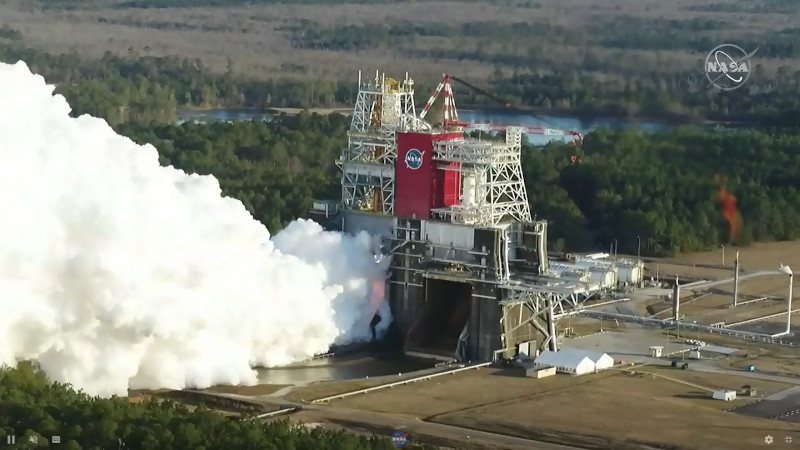 NASA conducted a hot fire Saturday of the core stage for the agency’s Space Launch System (SLS) rocket that will launch the Artemis I mission to the Moon. The hot fire is the final test of the Green Run series.

The test plan called for the rocket’s four RS-25 engines to fire for a little more than eight minutes – the same amount of time it will take to send the rocket to space following launch. The team successfully completed the countdown and ignited the engines, but the engines shut down a little more than one minute into the hot fire. Teams are assessing the data to determine what caused the early shutdown, and will determine a path forward.

For the test, the 212-foot core stage generated 1.6 million pounds of thrust, while anchored in the B-2 Test Stand at NASA’s Stennis Space Center near Bay St. Louis, Mississippi. The hot fire test included loading 733,000 pounds of liquid oxygen and liquid hydrogen – mirroring the launch countdown procedure – and igniting the engines.

“Saturday’s test was an important step forward to ensure that the core stage of the SLS rocket is ready for the Artemis I mission, and to carry crew on future missions,” said NASA Administrator Jim Bridenstine, who attended the test. “Although the engines did not fire for the full duration, the team successfully worked through the countdown, ignited the engines, and gained valuable data to inform our path forward.”

Support teams across the Stennis test complex provided high-pressure gases to the test stand, delivered all operational electrical power, supplied more than 330,000 gallons of water per minute to protect the test stand flame deflector and ensure the structural integrity of the core stage, and captured data needed to evaluate the core stage performance.

“Seeing all four engines ignite for the first time during the core stage hot fire test was a big milestone for the Space Launch System team” said John Honeycutt, the SLS program manager at NASA’s Marshall Space Flight Center in Huntsville, Alabama. “We will analyze the data, and what we learned from today’s test will help us plan the right path forward for verifying this new core stage is ready for flight on the Artemis I mission.”

The Green Run series of tests began in January 2020, when the stage was delivered from NASA’s Michoud Assembly Facility in New Orleans and installed in the B-2 test stand at Stennis. The team completed the first of the eight tests in the Green Run series before standing down in March due to the ongoing coronavirus pandemic. After resuming work in May, the team worked through the remaining tests in the series, while also standing down periodically as six tropical storms or hurricanes affected the Gulf Coast. Each test built upon the previous test with increasing complexity to evaluate the stages’ sophisticated systems, and the hot fire test that lit up all four engines was the final test in the series.

“Stennis has not witnessed this level of power since the testing of Saturn V stages in the 1960s,” said Stennis Center Director Rick Gilbrech. “Stennis is the premier rocket propulsion facility that tested the Saturn V first and second stages that carried humans to the Moon during the Apollo Program, and now, this hot fire is exactly why we test like we fly and fly like we test. We will learn from today’s early shutdown, identify any corrections if needed, and move forward.”

In addition to analyzing the data, teams also will inspect the core stage and its four RS-25 engines before determining the next steps. Under the Artemis program, NASA is working to land the first woman and the next man on the Moon in 2024. SLS and the Orion spacecraft that will carry astronauts to space, along with the human landing system and the Gateway in orbit around the Moon, are NASA’s backbone for deep space exploration.