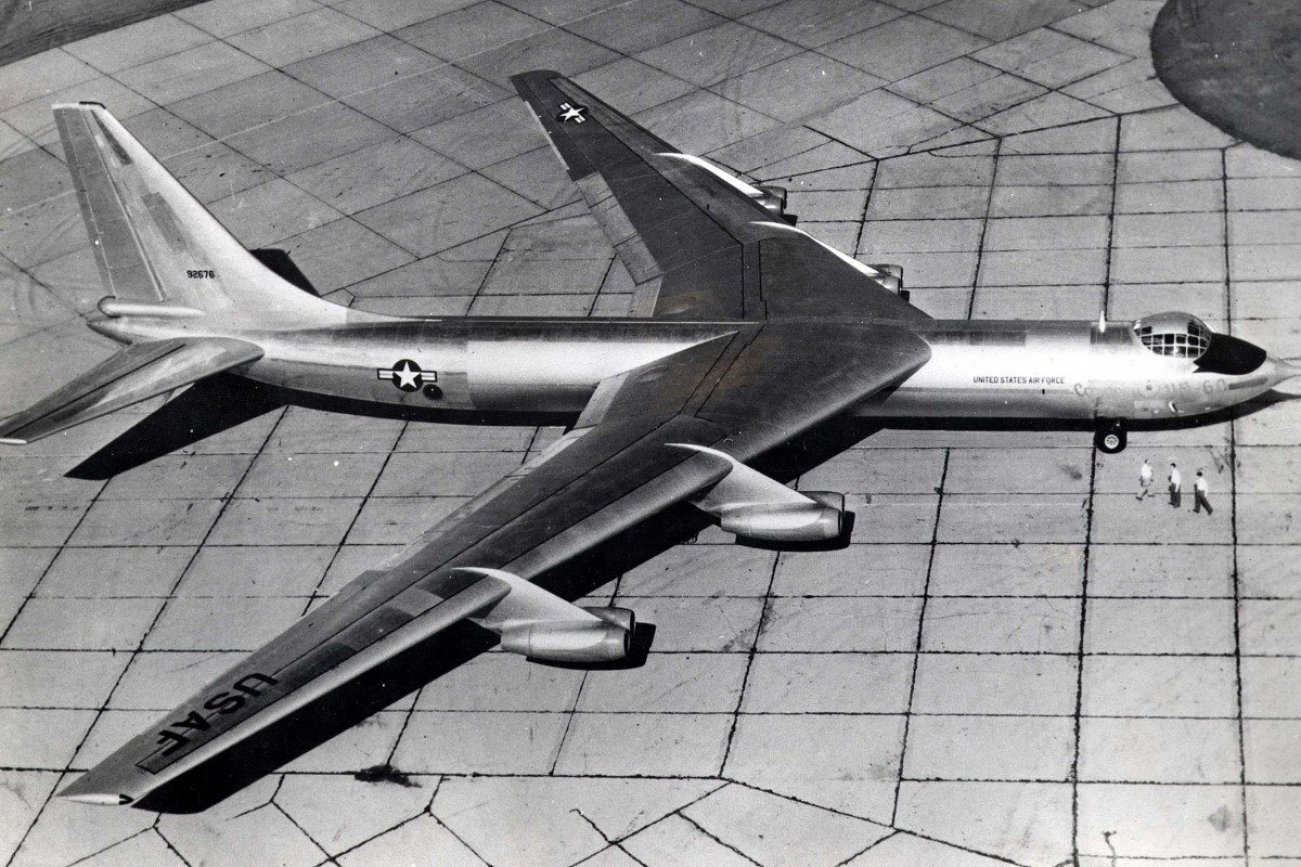 Some were certainly impressive.

Key Point: Designs often end up failing for a variety of reasons.

For every military aircraft that makes it into service, a thousand projects survive only in tattered blueprints in filing cabinets or as lonely prototypes in museums. Here, courtesy of War Is Boring’s David Axe and Hush-Kit’s Joe Coles, are 10 warplanes that might have been.

Forty-one feet long, powered by a single J79 turbojet and sporting a simple delta wing, the Fang bucked the trend toward bigger, heavier and more complex fighters. Northrop built a mock-up and pitched the N-102 to the Air Force in 1953 and the Navy in 1954. Ultimately, both branches opted for bigger fighters such as the F-4, which was roughly twice the Fang’s size and boasted two J79s.

But Northrop didn’t entirely give up on the idea of a small, simple fighter. The company’s F-5 family of fighters, including the F-5A, the much-improved F-5E and variants and even the prototype F-20 all owe their design philosophy to Schmued’s N-102. F-5s remain in service all over the world.

Aeroplane designers hate wheels. Wheels are for cars. The weight and complexity of a retractable undercarriage is a huge nuisance. Why not do away with them altogether?

The wartime Germans were very keen on this idea and built a series of airplanes that took off from trolleys. The aircraft would simply uncouple itself from the trolley as it took-off, the trolley remaining behind on the runway. The plane would land on simple skids.

A trolley takeoff frees an airplane from the need for vast, vulnerable runways. In a war, airbases would be priority targets and how ever good a fighter was, it be would utterly impotent if it had no runway to take off from.

Mindful of this problem, and fearing the technological hurdles of vertical take-off and landing, French firm Sud-Est turned back to the “trolley dolly” concept to create the Sud-Est SE.5000.

The aircraft took its first flight on Aug. 1, 1953. It was superb — trolley take-offs proved effortless and skid landings a delight even in crosswinds. It could be rapidly re-armed and re-fueled and would have made an excellent tactical fighter.

If required, the trolley could even have been rocket-assisted! But the “jet dirtbike” never made it into service as a new generation of concrete-loving warplanes left it far behind.

In the early 1950s, the U.S. Air Force wanted a turbojet-powered heavy strategic bomber to lug atomic bombs across oceans. Convair had built the piston-engine B-36 for the Air Force and decided that simply swapping out the B-36’s prop motors for jets — among other modest changes — would suffice to produce a winning new bomber.

The result was the YB-60, a 171-foot-long monster of a warplane sporting eight J57 turbojets. The first of two prototypes took off on its inaugural flight in April 1952. The YB-60 could fly 2,900 miles at a cruising speed of 467 miles per hour while lugging a 36 tons of bombs.

Impressive, sure — but not as impressive as the performance of the YB-60’s most direct competitor, Boeing’s B-52. The eight-engine B-52 cruises at 525 miles per hour over a distance of 4,500 miles while carrying 35 tons of bombs.

In 1955, the U.S. Navy and Air Force approached Bell Aircraft Corporation with a far-out idea — design a Mach-two fighter capable of launching and landing vertically. Bell dutifully drew up a design for what it unofficially called the XF-109.

With distinct rearward- and downward-blasting powerplants, the XF-109’s basic form is not dissimilar to that of the F-35B supersonic jump jet that Lockheed Martin designed for the U.S. Marine Corps 40 years later.

But the XF-109 was clearly ahead of its time. The Navy and Air Force both lost interest and the military cancelled the Bell jump jet in 1961 before the company could build any actual prototypes. The Harrier, the world’s first operational vertical-takeoff-and-landing fighter, flew for the first time in 1967. The Harrier is subsonic.

In January 1961, Lockheed’s legendary airplane-designer Kelly Johnson delivered an unsolicited proposal to the U.S. Air Force. His idea was to take the Mach-3 A-12 spy plane — the predecessor of the iconic SR-71 Blackbird — that Kelly had designed for the CIA and modify it into a very fast strategic bomber. More or less in parallel, Johnson was working on a missile-armed F-12 fighter version of the A-12. A YF-12 prototype is picture above.

The Air Force liked the RB-12 Mach-3 bomber idea but counter-proposed with a slightly altered design it called the RS-12. Take the A-12’s sled-like titanium airframe with its powerful J58 turbojets. Add a sophisticated, long-range radar and a nuclear-tipped air-to-ground missile based on the AIM-47 air-to-air missile that also armed the F-12.

The plan was for the RS-12 to penetrate Soviet air space at Mach 3.2 and 80,000 feet and fire a single missile from 50 miles away, striking within 50 feet of its aimpoint within a Soviet city.

The Defense Department ultimately canceled the F-12 on cost grounds and opted not to proceed with the RS-12, as ballistic missiles were beginning to supplant manned bombers. The Air Force did ultimately acquire the SR-71 reconnaissance version of the A-12 and operated it into the 1990s.

In the 1960s the U.S. Army was growing sick of its long dependence on inappropriate U.S. Air Force planes for close-support missions. Aircraft such as the Republic F-105 were simply too fast and too vulnerable to support troops on the ground effectively.

Instead, the Army wanted the versatility and forward-basing possibilities of a vertical-takeoff platform that could also hover. To excel in the tough close-support role, the type would need to be heavily armed and armored. This need led to the Advanced Aerial Fire Support System program.

Convair, a company famed for its adventurous designs, responded to the Army’s AAFSS requirement with typical ambition. Drawing on its experience with the tail-sitting XFY-1, the company proposed a two-man ring- or annular-wing ducted-fan design quite unlike anything else in service, though somewhat similar to French firm SNECMA’s experimental C.540.

The concept was bizarre in appearance, but Convair believed it was the perfect configuration for an aircraft combining a helicopter’s unusual abilities with some of the offensive features of a military ground vehicle.

One of the greatest challenges was creating a cockpit that tilted so the pilot was not facing the sky in the take-off and landing and ground-based modes. This necessitated a complex, hinged forward fuselage, giving the type its distinctly Transformer-like looks.

In the late 1960s, Lockheed saw an opportunity. Anticipating worldwide demand for 7,500 advanced but — in the company’s own words — “reasonably-priced” jet fighters over the next decade, in 1971 it began circulating a proposal for an improved, safer CL-1200 Lancer version of the speedy but notoriously hard-to-fly F-104.

Lockheed’s Skunk Works division, with famed designer Kelly Johnson still in charge, enlarged the F-104’s wing and fin, shifted the tailplane lower on the fuselage, tweaked the engine inlet, added internal fuel capacity and replaced the F-104’s J79 engine with a TF33. The resulting CL-1200 was, in theory, more maneuverable and controllable than the F-104 and cost around $2 million per copy, assuming a large production run. At the time, a new F-4E cost at least $2.4 million.

Lockheed entered the CL-1200 into the U.S. military’s International Fighter Aircraft competition, which aimed to select an export warplane for America’s allies. But Northrop’s F-5E won the contest, and Lockheed scrapped the CL-1200 concept, having only ever produced a mock-up of the plane.

France’s Mirage 2000 has been described by many fighter pilots as the perfect flying machine. Its ferociously high performance and almost telekinetic responsiveness have left pilots of all nationalities giddy with love and respect for the “Electric Cake Slice.”

So imagine a Mirage 2000 with twice the power and you have a pretty spectacular airplane — the Mirage 4000, which first flew in 1979 and was in the same heavyweight class as the F-15 and Su-27.

The Mirage 4000 was one of the first aircraft to incorporate carbon-fiber composites to keep down weight — and was probably the first to feature a fin made of this advanced material. Thanks to its light structure and powerful engines, it had a thrust-to-weight ratio that exceeded 1:1 in an air-to-air load-out.

On its sixth test flight, the French warplane reached 50,000 feet and Mach 2 in three minutes and 50 seconds. The Mirage 4000 would have been agile, long-ranged and able to haul an impressive arsenal. Its capacious nose could have held an advanced long-range radar.

But the French air force didn’t want it. Iran — another potential customer — suffered a revolution and Saudi Arabia, also on the look-out for a heavy fighter, opted for the F-15. Despite its obvious potential, the Mirage 4000 failed to find a customer, which was an enormous blow for Dassault, as the company had privately funded the type’s development.

Kamov’s long flirtation with twin, wingtip-mounted rotors led to some truly startling ideas. One was a vast, C-130-size transport. At the other end of the size spectrum was the V-100, an extremely fast battlefield helicopter that Kamov tinkered with in the 1980s.

As well as the unusual rotor configuration, the V-100 was to have a single pusher propeller that the designers expected would give the aircraft a top speed of around 250 miles per hour— a whole 70 miles per hour faster than the U.S. Army’s AH-64, itself no slouch.

Armament that Kamov considered for the V-100 included two 23-millimeter cannons or a single 30-millimeter weapon … and even the huge Kh-25 air-to-ground missile. In the end, Soviet authorities considered the design too risky. It never flew.

Russia, and the Soviet Union before it, often stands accused of stealing U.S. aircraft concepts and technologies. In reality, there’s a give and take — as well as similar design solutions resulting from parallel teams working to solve similar problems.

That American firm Lockheed Martin bought data from Russia’s Yakovlev regarding the short-takeoff, vertical-landing propulsion system of the Yak-41 fighter is pretty notable. The Yak-41, impressive though it was, was merely a stepping stone to the formidable Yak-43.

The Yak-43, work on which began in 1983, would have been faster and more versatile than the Anglo-American Harrier. It’s possible the Yak-43 would have matched the performance of the MiG-29. The tumultuous, post-Soviet transitional period that made the collaboration with Lockheed possible also killed the Yak-43, but its DNA lives on in Lockheed’s F-35B jump jet.

The United Kingdom’s deep expertise in stealth technology is not widely known. Britain pioneered radar-absorbent material for aircraft, worked on reduced radar-observability for nuclear warheads in the early 1960s and was able to create a world-class stealth testbed in the form of the Replica stealth-fighter demonstrator.

Prior to Replica in the 1980s, British Aerospace developed an aircraft concept so advanced that it remained classified until 2006.

The BAe P.125 study was for a stealthy supersonic attack aircraft to replace the Tornado. It was to be available in both a short-take-off and vertical-landing variant and a conventional version. The conventional variant would have featured a central vectored nozzle, The STOVL version would have had three vectoring nozzles.

In some ways, the P.125 was more ambitious than Lockheed Martin’s later F-35 is. The aircraft was to have no pilot transparencies, with the reclined pilot instead viewing the world through synthetic displays.

It is likely that this formidable interdictor would have been even less visible on radar than the F-35 is, although the absence of planform-alignment is noteworthy. Despite its 1980s vintage, many of the P.125’s low-observable features are reminiscent of today’s latest fighters. Others, such as its unorthodox wing design, are unique.

BAe quietly dropped the project when Britain joined the F-35 program in the 1990s.

This article first appeared several years ago and is reprinted here due to reader interest.