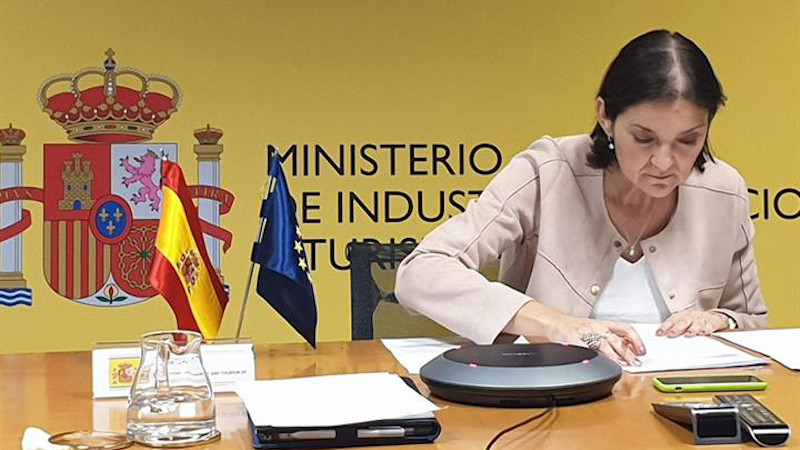 Spain’s Minister for Industry, Trade and Tourism, Reyes Maroto, sent a letter to the Vice-President of the European Commission, Valdis Dombrovskis, urging him to start talks with the new United States (US) Administration to call to suspend the Helms-Burton Act and the customs duties on Spanish products being applied by the US.

The Spanish minister urged the Vice-President of the European Commission to start talks with the new US Administration, since the Helms-Burton Act prejudices Spanish trade and investment in Cuba, particularly the tourism sector, and also to call for the suspension of customs duties on Spanish products being applied by the US, which prejudice the export of olive oil, wine and table olives, among others.

“The restoration of mutual trust is clearly one of the key goals of our future trade policy. We need to identify the main areas of immediate action and base ourselves on mutual needs and common goals that we share in our respective foreign economic and trade policies. The resolution of our disputes would send out a message of confidence to the private sector, which is calling for a negotiated solution between the two parties”, stated the minister in her letter.

Reyes Maroto focused on four priorities in new trade relations between the EU and the US: the resolution of trade disputes; improved cooperation in areas of mutual interest for the future, fostering the highly necessary reform of the multilateral trade system and, finally, coordinating responses to avoid trade distortions while laying the foundations for resilient, fair and open international trade in the future.

Specifically, the minister referred in her letter to stepping up contacts for a negotiated, balanced and mutually beneficial solution to the civil aviation dispute (Airbus-Boeing), the customs duties on Spanish table olives, the tax on certain digital services and safeguard measures on steel and aluminium.

“Working on the suspension of the Helms-Burton Act is one of Spain’s main priorities, to which end we call to step up diplomatic contacts underway between the European Commission and the United States to suspend this Act, which is seriously affecting our trade and investment in Cuba, particularly regarding tourism, in which Spanish companies are market leaders”, concluded the minister.

The article Spain Wants Biden To Suspend Helms-Burton Act And Customs Duties On Its Products appeared first on Eurasia Review.