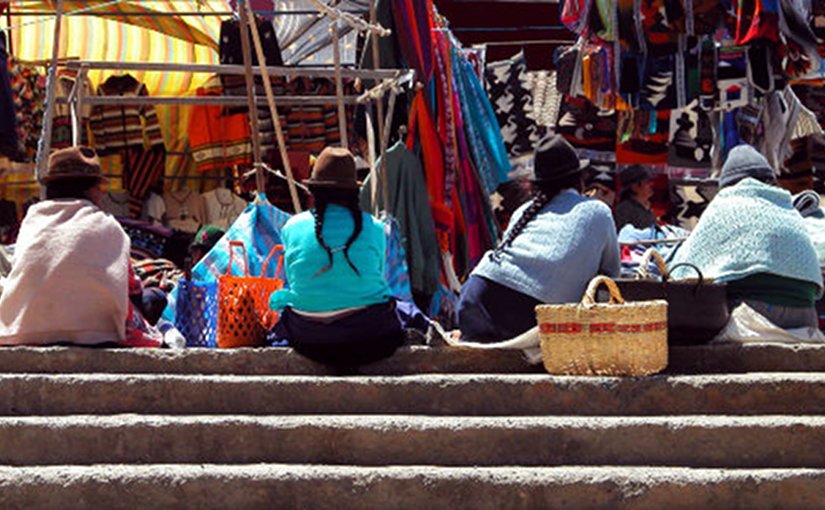 On February 7, Ecuador will hold elections for President and for its legislative body, with 137 positions to be decided for the National Assembly. Though 16 presidential candidates participated in the debates, there are three major candidates. Andrés Arauz and his vice presidential candidate, Carlos Rabascall, represent La Unión por la Esperanza (The Union of Hope, UNES), what was Alianza País led by former president Rafael Correa before the party split in 2017. Guayaquil banker Guillermo Lasso and Alfredo Borrero are the candidates for the conservative alliance Creando Oportunidades (Creating Opportunities, CREO). Carlos “Yacu” Pérez is the candidate of the indigenous Pachakutik Party.

Many from the Correa camp have questioned Pérez’s genuine commitment to defend indigenous communities and remember that some factions of the Pachakutik Party have, in the past, opportunistically aligned with the right against Correísmo.[1] The election represents a showdown between ten years of the Revolución Ciudadana (Citizens’ Revolution, 2007-2017) and the past four disastrous years of unfettered neoliberalism. As of now, polls show Arauz, Correa’s candidate, is clearly in the lead, polling at 37% and Lasso at 24%.[2]

The Advances of La Revolución Ciudadana

Rafael Correa’s presidential victory in 2006 was a key part of the Pink Tide and South American effort to realize Bolívar’s dream of regional economic and political integration and independence from foreign domination. As Minister of Economy and Finance in 2005, Correa distinguished himself from other politicians by calling out the pitfalls of International Monetary Fund (IMF) loans, advocating for social planning and proposing a National Assembly to tap into the power of Ecuador’s diverse working sectors.[3]

It is important to  outline the progressive nature of the Correa administration. During Correa’s two terms, the 17 million people of Ecuador saw increases in the minimum wage and social security benefits, a progressive tax on the rich, and higher investments in education and social programs, all while attaining economic growth.[4] For this reason, traditional interests and their U.S. backers opposed Alianza País and sought to sew internal divisions and solidify alliances with sections of the Confederation of Indigenous Nationalities of Ecuador, CONAIE.

The Story of a “Vendepatria”[5]

The leadership and rank-and-file of Alianza País understood that Lenin Moreno, who had served as Rafael Correa’s vice-president for six years, was best positioned to carry Correísmo forward. Within months of winning the presidency in 2017, however, Moreno reneged on his campaign promises. In one of the great about-faces in the history of South America, Moreno betrayed the movement and embraced a neoliberal model for Ecuador. Under Moreno, Ecuador also withdrew from the Bolivarian Alliance for the Peoples of Our America (ALBA) in 2018 and pulled out of the Union of South American Nations (UNASUR) in 2019, weakening two of the most important instruments of continental unity.[6]

Throughout the ups and downs and contradictions of the entire liberatory project, the leadership of the Citizens’ Revolution has maintained a self-critical posture. After the election of Lenin Moreno, Alianza País split into pro-Moreno and pro-Correa tendencies. This speaks to the reality that some of Alianza País’ functionaries were not guided by principles but were rather attracted to power. Sections of CONAIE have sustained legitimate critiques of Correísmo, including concerns over the environmental impact of resource exploitation and infrastructure projects. These are problems the Correista leadership continues to address and it shows the importance of the ethical and political formation of a new generation of Ecuadoreans.[7]

Ricardo Patiño’s book Construir Poder Transformador. Debate Latinoamericano, lays out the pitfalls of over reliance on Correa’s charisma and indicates some of the challenges that lay ahead (Patiño is the Former Minister of Foreign Affairs under Correa’s Presidency). The grassroots leadership of UNES warns of dependence on one savior and the importance of building an entire movement that can independently defend its interests: “The fundamental problem has been an absence of a solid and profound counter-hegemonic ideology that guides the decisions, practices and relations of the popular sectors as well as political leaders.” [8]

Will the Tide again Turn?

In an example of flipping reality on its head in 2017, the incoming Moreno government immediately accused the Citizens’ Revolution of wanton corruption. Similar to the oligarchies’ attacks demonizing the Pink Tide in Brazil, Paraguay, Venezuela, Bolivia and across the continent, this was a classic case of Lawfare.[9] The neoliberals, fearful of the enormous popularity of Correísmo, waged a war through judicial means. Jorge Glas, former vice-president under Correa, is still in jail on trumped-up charges and recently contracted the coronavirus.[10] Ricardo Patiño and the President of the National Assembly Gabriela Rivadeneira are still in exile in Mexico. Correa himself is banned from his homeland and faces years in jail on  highly dubious charges of corruption.

An Arauz victory would open the country back up to those who put human life in community before private accumulation and carry forth an agenda that targets the real culprits of corruption.[11]

Again, most polls have Andrés Arauz, the UNES candidate, in the lead.[12] Alarmed at another potential loss of ground in the continental struggle for power between an independent left-wing, anti-imperialist movement, the old order beholden to U.S. interests is scrambling to prevent Arauz’s electoral victory. There is good reason to be concerned. In November 2019, the U.S.-dominated Organization of American States (OAS) backed a coup in Bolivia to prevent an electoral victory by MAS candidate and incumbent president Evo Morales, and it took a year for the popular movements to restore their democracy.  Concerned about a renewed attempt to sabotage democratic institutions in Ecuador, former Ecuadorian president Rafael Correa has warned that Moreno’s meeting with  OAS Secretary General Luis Almagro this week in Washington DC may be a prelude to a similar attempt at OAS subversion.[13] The corporate-dominated media has provided the disinformation for this by publishing material which constitutes scare tactics and red-baiting against Arauz, claiming that his intention is to turn Ecuador into “another Venezuela.”[14] There are allegations of vote-tampering, and UNES has warned the population to be ready for any type of chicanery.[15]

Another key issue in the election are the IMF loans that the current administration negotiated with western banks that force austerity on an already beleaguered people. IMF loans to the region and exploited countries have long been a neocolonial tactic for extracting wealth from developing countries. As the old proverb goes: “those who lend, command.” Under the guise of humanitarian help with the raging pandemic, the IMF issued  loans to an all too willing Moreno administration to the tune of 6.5 billion dollars just before the close of 2020.[16] As is customary, the IMF stipulated austerity, the deregulation of the Central Bank and sale of gasoline and diesel without subsidies and at world market prices. Lasso has indicated that if elected president, he would not disavow the IMF agreement, drawing a stark contrast between himself and Arauz, who said he will renegotiate the country’s deal.[17]

One of Trump’s 11th hour actions before leaving office was to oversee a U.S. Development Corporation loan to Ecuador for 3.5 billion dollars that requires the government to privatize a major oil refinery and parts of the country’s electrical grid, and to exclude China from its telecommunications development.[18] Washington is alarmed at the growing Chinese influence across South America and the Global South and sees Ecuador as an important beachhead to prosecute this “New Cold War” through the Growth in the Americas (CRECE) program. Moreno was more than happy to be a major U.S. client in the region along with Iván Duque and Laurentino Cortizo, the presidents of Colombia and Panama respectively. Vijay Prashad evaluates how the two global powers treated Ecuador in the context of waning U.S. hegemony: “Chinese banks lent money for the construction projects. These funds came with no conditions. The U.S. government money, on the other hand, came with substantial claims on the government of Ecuador’s policy orientation.” The result is the Ecuadorian people suffer, as they now have a debt totalling $52 billion.[19]

In October 2019, a massive protest movement rocked the country. The world watched with bated breath as a grassroots movement opposed to austerity measures occupied Quito and nearly toppled the Moreno government. The government attempted to crush the protests, leaving at least ten dead, more than 1,000 people arrested and more than 1,300 injured.[20] When repression failed to quell the protests, Moreno rescinded on an International Monetary Fund-backed program, known as Decree 883, that raised fuel prices, proving again the power of a united, mobilized people.

The year 2020 ushered in a new tragedy for Ecuador. The Moreno government failed to respond adequately to the COVID-19 pandemic in any serious, unified way. Abandoned bodies lined the streets of Guayaquil last April putting on tragic display before the entire world, the misleadership of Ecuador’s largest city, long governed by neoliberal politicians.[21] These dehumanizing images encapsulated what three years of Lenin’s economic and political agenda has meant for everyday people. On January 26, 2021, Ecuador’s Parliament began the process of impeaching Health Minister Juan Zavallos for mismanaging the COVID-19 vaccination program, and a few days later Ecuador’s chief prosecutor began an investigation into Zavallos for alleged influence peddling.[22] On January 29, police in Quito shut down a clinic for giving out 70,000 fake vaccines.[23] TV presenter Efraín Ruales, who had reported on corruption in the current administration, was gunned down and murdered on January 27.[24] As of now, there are 249,779 coronavirus cases in Ecuador and 14,851 deaths.[25]

This is the backdrop for this week’s election, not just for the 17 million people of Ecuador and hundreds of thousands of others in the diaspora, but for the future of the Pink Tide in Latin America. Will Ecuador continue down the road of subordination to neoliberal imperatives of the IMF and Washington, or will it resume the Citizens’ Revolution and rejoin the movement towards regional integration and independence? This decisive election will determine Ecuador’s direction for the next four years and beyond.

*Danny Shaw teaches Latin American and Caribbean Studies at John Jay College of Criminal Justice and Hostos College, and is a Senior Research fellow at COHA.

[1] “In Defense of Rafael Correa Interview with Guillaume Long”, https://www.jacobinmag.com/2015/09/ecuador-rafael-correa-alianza-pais-quito-conaie-peoples-strike-protest

[4] “In Defense of Rafael Correa”, https://www.jacobinmag.com/2015/09/ecuador-rafael-correa-alianza-pais-quito-conaie-peoples-strike-protest

[8] “The fundamental problem has been the absence of a counter hegemonic ideology, solid and deep, that guides the decisions, practices and relationships of popular sectors and also political leadership,” from Patiño, Ricardo. Construir Poder Transformador. Debate Latinoamericano.

[19] “US Rescue of Ecuador from Chinese Debt is a Trap”, https://newcoldwar.org/us-rescue-of-ecuador-from-chinese-debt-is-a-trap/

[21] “Bodies are being left in the streets in an overwhelmed Ecuadorian city”, https://www.cnn.com/2020/04/03/americas/guayaquil-ecuador-overwhelmed-coronavirus-intl/index.html

[24] “Horrifying moment TV presenter, 36, who has previously received death threats for reporting on corruption, is assassinated during a drive-by-shooting in Ecuador”, https://www.dailymail.co.uk/news/article-9198501/TV-presenter-36-received-death-threats-reporting-corruption-assassinated-Ecuador.html