In mid-November, several striking monuments rose out of the earth in the heart of downtown Los Angeles. One paid tribute to Gaspar Yanga, a slave-turned-liberator who led a successful uprising against Spanish colonizers in the 16th century. Yanga doesn’t appear in many American textbooks, and the Los Angeles city council didn’t pay for the statue.

Instead, Yanga’s statue appeared in augmented reality, through an app called Kinfolk. Using tech similar to Pokémon Go, users can place and view monuments of oft-forgotten historical figures like Yanga in public spaces. The app then shows historical context through text, music and video.

The Kinfolk app’s launch comes as fierce debate rages about the monuments staring down at us from city centers: those that pay tribute to confederate leaders, slave owners, or other tarnished once-heroes.

Monuments of Thomas Jefferson, George Washington, Robert E. Lee and many others were torn from their perches in the summer of 2020, in turn causing a backlash in which some conservatives felt that their history and values were being desecrated. The tensions revealed the deep fractures in America’s own self-perception and the fundamental deficiencies in what we collectively know and understand about our own country.

Idris Brewster, the co-founder of Kinfolk, hopes that AR can be part of solving the very old problem of how history remembers heroes. With the Kinfolk app, available for Apple and Android, Brewster hopes to make virtual monuments visible across the country. In the process, he hopes to help people reimagine civic spaces, engage students in interactive learning, and allow those who have never seen themselves mirrored in their city’s monuments to do so for the first time.

“If we want an equitable future, we need to have our collective consciousness include the stories of those folks who have been sort of purposely erased from the canon of American history,” he says.

Andrew ChowA monument of Biddy Mason, as seen in the Kinfolk app.

“Public spaces aren’t built for us”

Brewster has long worked at the intersection of technology and equity: He previously worked on Google’s Code Next, which offered free computer science courses for Black and brown students. He founded Kinfolk, previously known as Movers and Shakers NYC, in 2017, when he and his creative partner Glenn Cantave were part of a dialogue on social media about New York’s historical statues and how they needed to be more diverse. For example, of the 150 or so historical statues in the city, historians counted only 5 women among them.

For Brewster, this discrepancy matters because monuments “show the values of a society: what people they revered, what histories are important,” he says. “And the point we’re at now, these public spaces aren’t built for us.”

While Brewster campaigned for the removal of problematic monuments—including the Christopher Columbus statue in Manhattan’s Columbus Circle, which he says represents an “oppressive figure” and a “tool of white supremacist history”—he also dreamed of erecting a new set of monuments of long-forgotten historical figures. But to build new monuments necessitates “a lot of bureaucracy, red tape, a lot of hoops you have to jump through,” he says.

Read More: Confederate Monuments and Other Disputed Memorials Have Come Down in Cities Across America. What Should Take Their Place?

At the time, the AR game Pokémon Go was sweeping the nation, inspiring millions of people to hunt for cartoon monsters by venturing through their towns and cities and across the world.

Brewster saw the technology as a potential way to circumnavigate some of his challenges. “With AR, we can create as many monuments as we want for the price of one physical monument, and we could put them anywhere,” he says.

Kinfolk’s app works using your smartphone’s camera function. Open the app and “place” an image of a monument wherever you wish. You can then walk around the monument, read about that historical figure’s history and listen to related music or interviews about them. For now, the monuments only appear on your phone’s version of the app, and disappear when you close the app. Each virtual monument is thoughtfully designed. Kinfolk handpicked artists to collaborate on how the AR monuments look. There are currently more than a dozen monuments available in the app, including those of Harry Belafonte and Maya Angelou.

Brewster and Kinfolk have been unveiling different AR projects over the last few years, but the November launch in Los Angeles, presented in collaboration with The Music Center and the artist collective For Freedoms, is their biggest yet. It honored Yanga as well as Biddy Mason, who co-founded the oldest African American church in the city, and Beatrice Alva, who helped preserve the history of California’s Gabrielino-Tongva tribe.

This release from Kinfolk added a geo-specific element to the app: last weekend, the only place you could see the monuments of Yanga, Biddy Mason, and Beatrice Alva was in Los Angeles’ Grand Park, where Kinfolk threw a public party complete with live music, DJ sets and digital art-making. (Those monuments are now available to the general public, and can be placed wherever users wish in the world.) 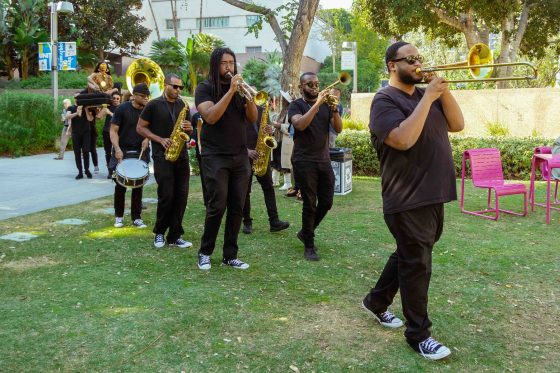 The geo-specific element both makes the app more interactive—in that you are forced to venture into the world and engage with history in the context of public spaces—and also places an emphasis on learning community-specific history.

Brewster hopes to elevate local history in cities across the country. After Los Angeles, he and Kinfolk will embark on a national tour to stage virtual monuments and in-person events. In Alabama, for example, Brewster plans to partner with the community-driven organization Project Say Something to both protest the Confederate monuments there while creating new digital ones in collaboration with local artists. As a whole, he hopes Kinfolk will serve as a digital archival project, in which all sorts of histories are unearthed and preserved.

Brewster expects to meet resistance, especially at a time in which school boards and local leaders are increasingly rejecting the spreading of Black history. “We’re going to try to go to Richmond, New Orleans, and other cities that are deeply entrenched in that. That is definitely going to increase the amount of angry emails we’re going to get,” he says. 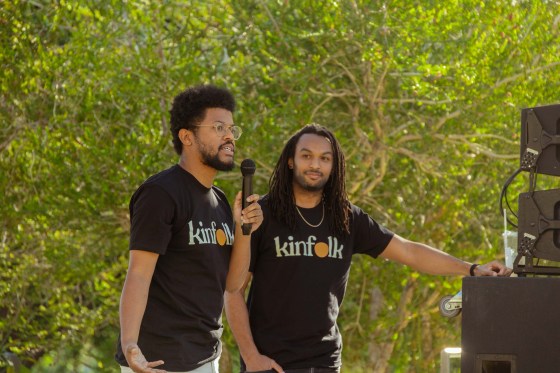 An interactive way to explore history

While Brewster knows that some people will reject his mission out of hand, he hopes that the app will be particularly useful for Gen-Z students who respond better to more immersive forms of learning. “Kids are visual learners. They’re playing Fortnite, they’re on TikTok, editing videos; they don’t like to read,” he says. “We want to provide kids with an interactive way to engage; to be able to make more connections for themselves and explore, sort of like a video game.”

He hopes Kinfolk will especially be a resource for students in schools that have blocked courses related to Black history due to the larger backlash around Critical Race Theory. “I think that it’s really important that teachers have the tools to be able to bring these narratives into their classroom in easy ways,” he says.

And even if he will never be able to change the minds of those vehemently against him, Brewster is optimistic his app can make a difference, especially for a younger generation ready to embrace new modes of learning that use interactive technology, a familiar way to engage with the world. “There’s no way to move forward to a more equitable place if we can’t acknowledge the sins of our past—if we can’t acknowledge how Black and brown culture was exploited and killed to get to where we are now,” he says. “Monuments are really one tool to be able to have that conversation.”