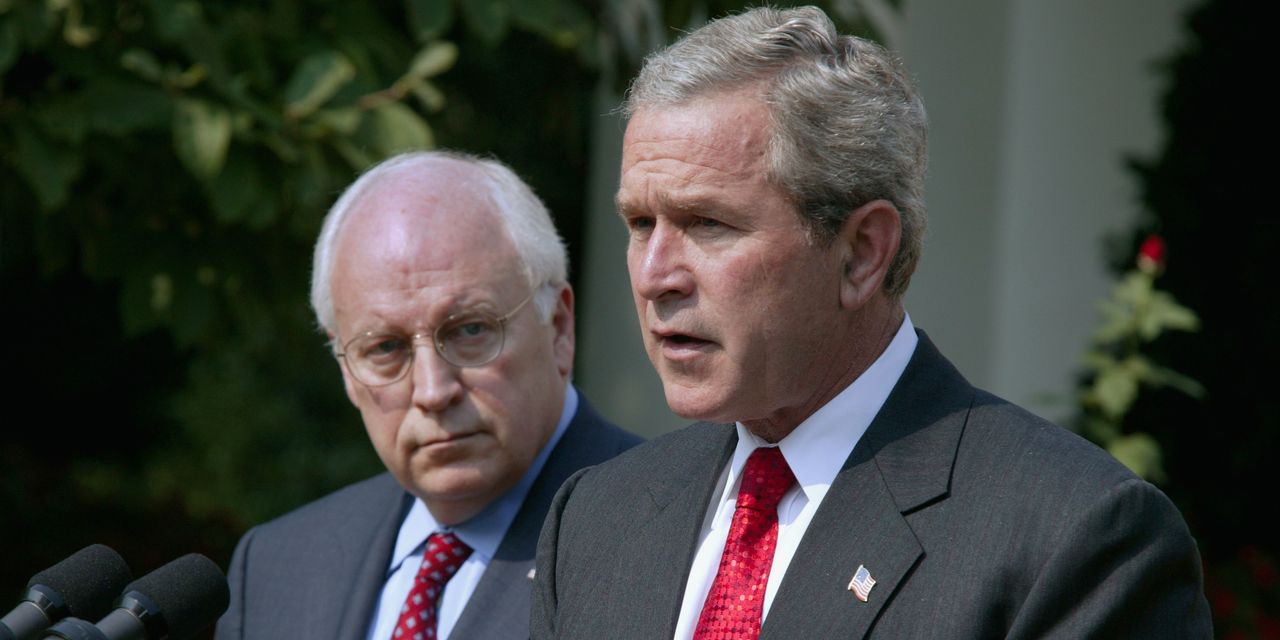 A rough transcript of a 2004 interview George W. Bush and Dick Cheney gave to a government commission investigating the Sept. 11, 2001, terrorist attacks provides a glimpse of the former president’s and vice president’s views of the seminal event that defined their eight years in the White House.

The April 2004 interview with the bipartisan 9/11 commission, which took place in the Oval Office, included discussion of intelligence warnings before the attacks and the events that unfolded on the day of Sept. 11, according to the copy of the 31-page document. It also describes Mr. Bush acknowledging that Air Force One had poor communications while he was on the plane shortly after the attacks began—and Mr. Bush’s assertion that he gave Mr. Cheney the authority to shoot down commercial airliners that were unresponsive.

The newly declassified document was released to the public Wednesday.

“‘Yes, engage the enemy,’” Mr. Bush is described as saying he had told Mr. Cheney. “‘You have the authority to shoot down an airplane.’” In other instances, the document recounts Mr. Cheney repeatedly telling Mr. Bush, who was on a stage at a school in Florida when the attacks began, not to return to Washington.

The interview wasn’t recorded, but a note taker was present. The document was authorized for public release by the Interagency Security Classification Appeals Panel, a body of representatives from various federal departments. It contains few redactions and includes Mr. Bush’s reflections on threat reports he received in the spring and summer of 2001. It is not a verbatim transcript, but a “memorandum for the record” taken during the meeting.

The attacks, just eight months into Mr. Bush’s presidency, killed nearly 3,000 people in New York, the Pentagon and Shanksville, Pa., and prompted the Bush administration to launch wars in Afghanistan and Iraq that would last much of the next two decades. The government’s failure to foresee and prevent them led to the massive expansion of the U.S. security and intelligence apparatus, including the Department of Homeland Security, the Transportation Security Administration and the Office of the Director of National Intelligence.

In the interview, Mr. Bush repeatedly pushed back against suggestions from some of the 9/11 commissioners and others that he and his top advisers could have been more proactive against the terrorist group al Qaeda, which had already attacked two U.S. embassies in East Africa and the Navy destroyer USS Cole, before Sept. 11, 2001.

The president told the commission that an item in his Aug. 6, 2001, Presidential Daily Brief entitled “Bin Ladin Determined to Strike in U.S.,” about the al Qaeda leader, contained no information about al Qaeda cells inside the U.S. “There was no actionable intelligence on such a threat—not one,” the transcript quotes him as saying. 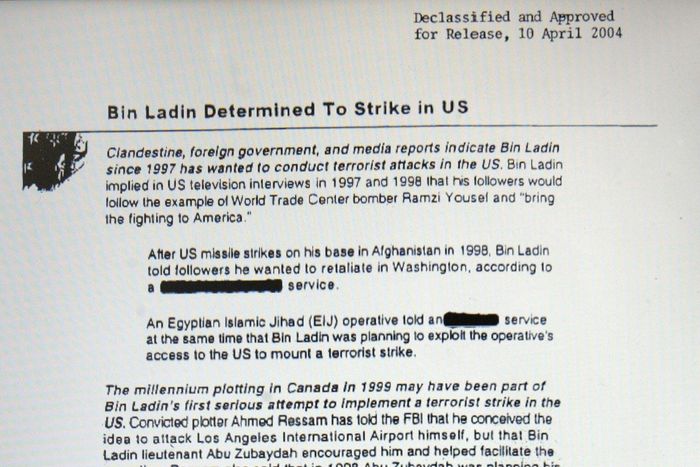 That intelligence report, declassified in 2004, said the Federal Bureau of Investigation had information on “patterns of suspicious activity in this country consistent with preparations for hijacking or other types of suspicious attacks,” but provided no details.

Nor was there appetite for putting U.S. military forces inside Afghanistan, where al Qaeda was based, before the attacks, Mr. Bush said. He quoted British Prime Minister Tony Blair as telling him, had Mr. Bush suggested it, “I would have looked at you like a nut.”

Messrs. Bush and Cheney weren’t under oath, after the White House argued that would set a concerning precedent for future presidents. Afterward, Mr. Bush described the meeting as cordial, telling reporters he had answered every question.

Philip Zelikow, executive director the 9/11 Commission, said that while much of the material from the interview was cited in the commission’s 2004 report, the memorandum gives the public a look at Mr. Bush’s discussion of the event that shaped his presidency, and at his relationship with Mr. Cheney.

“For a lot of people, it will be the first time they can really hear George Bush talking about the issue in a direct way under prolonged examination,” said Mr. Zelikow, who was present at the interview and drafted the memorandum. “It’s more the private Bush, not the public Bush.”

The interview, he said, undercuts a stereotype that Mr. Bush was deferential to, or even manipulated by, his vice president. Mr. Bush “took command from the start” in the session, he said.

The 9/11 Commission issued its final report in July 2004, concluding the U.S. government was ill-prepared to detect signs that al Qaeda was planning the attacks. The report was seen as a landmark document upon its release and became a bestseller—an unusual feat for a government document.

The 9/11 Commission document contains new insights into confusion at the highest levels of the U.S. government in the hours after the attacks. 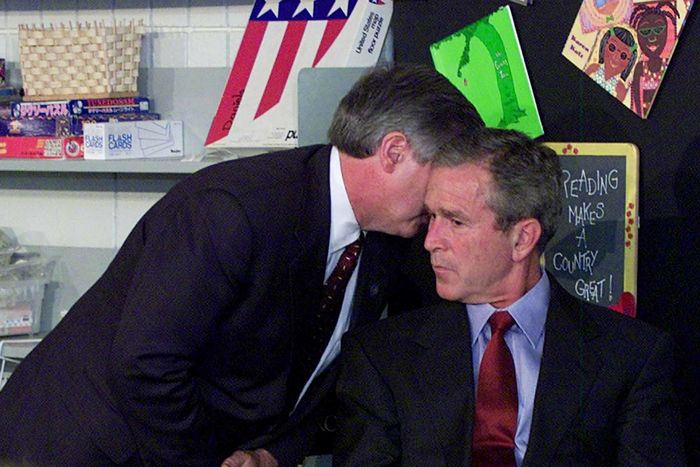 Mr. Cheney thought the plane that crashed near Shanksville, United Airlines Flight 93, had been shot down by U.S. military aircraft. Mr. Bush was asked for authority to shoot down an airliner coming from Madrid, only to be told minutes later that the plane had actually landed in Madrid. Even on Air Force One, “communications were not as good as they should have been,” Mr. Bush told the commissioners.

In another revelation, the chairman of the commission, former New Jersey Gov. Thomas Kean, asked Messrs. Bush and Cheney if they were aware that the Secret Service had scrambled jets from Andrews Air Force Base outside of the military chain of command after the attacks.

“The president, surprised, asked the chairman to repeat ‘ordered by the Secret Service?’” the document states. “The chairman affirmed that. The president said he did not know about that.”

Last year, the Public Interest Declassification Board—a small panel of experts selected by presidents and congressional leaders to advocate for more transparency around government national-security information—sent a letter to President Biden recommending a list of 9/11 Commission documents to give priority to for declassification and public release. The board was involved in reviewing material for disclosure.

In addition to the interview with Messrs. Bush and Cheney, the board also requested the release of interviews with former President Bill Clinton, former Vice President Al Gore and former national security officials including Condoleezza Rice, and a summary and analysis of information in president’s daily briefs from the Clinton and Bush administrations on al Qaeda terrorism planning.

In a statement, Ezra Cohen, chair of the declassification board, said the release of the historical record would be “an important step towards additional public transparency.”

Mr. Cohen added the board hoped in the coming months that additional records about the attacks would be released, consistent with a Biden executive order signed last year ordering the review of still-classified 9/11 documents for potential public disclosure.

Write to Dustin Volz at dustin.volz@wsj.com and Warren P. Strobel at Warren.Strobel@wsj.com